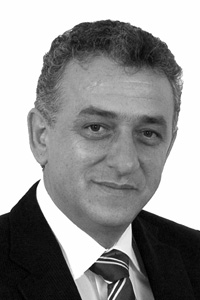 Vasileios Vyzas was born in Emporio, Kozani, Greece in the 23rd of October, 1959. He studied medicine in Universita di Sapienza (Rome) and Aristolte University of Thessaloniki, and his current occupation is cardiothoracic surgery. He is married to Vivi Nalbanti, and he has two sons, Georgios and Konstantinos.Parallel to his studies and professional occupation, he had been practicing art in various forms since the age of 17. As a hobby, he studied and practiced art in various ateliers in Thessaloniki, shadowing a plethora of painters in pursuit of the development of his own, personal style. In an attempt to expose his art to the public, Vasileios had three personal artistic exhibitions in Thessaloniki, in a bar called Stretto, in Vafopouleio cultural center and in Casa (Villa) Bianca. He has also taken part in a variety of group exhibitions.