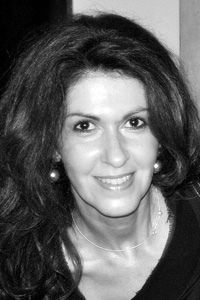 Fotini graduated from the Technical University of Athens T.E.I in Greece and showed particular interest in topics such as typography, lettering art, photography, image processing, traditional  bookbinding as well as in a wide variety of printing methods and techniques. However, she chose engraving through which she focused and further developed an artistic and aesthetic culture. She is involved in various engraving projects and participated in group exhibitions in Greece and abroad. She was one of the two preferred artists who closely cooperated in the event for the  Şİşlİ Greek Orthodox Cemetery in Constantinople which was organized by the Ecumenical Patriarchate (2014).Her engraving -Thessaloniki selected to decorate the cover of the Scientific Yearbook of the Thessaloniki Center (8th volume , 2013, Municipality of Thessaloniki) and the engraving – Vafopoulio, which is printed in large size cotton banner, currently decorates the main facade and presents the Vafopoulio Cultural Centre in Thessaloniki.