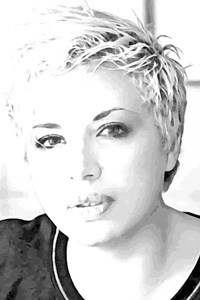 Born in Thessaloniki, where she lives and works in a large group of diagnostic centers for many years. She’s married and a mother of an adult son . Nevertheless, painting consists a large part of her life, her main occupation and a dream of once becoming her only “profession” . Engaged with painting ever since she was a child, she later attended long-term classes with painters Pantos, Psarrakis and painter-architect Papiotis. After years of searching and experimentation she has come to deal – this period – especially with plastic paint and wood. She has presented three solo exhibitions which were successful : – Thessaloniki, Theatre SOFOULI, 2003 – Thessaloniki , Toss Gallery-LA DOSE, 2012 – Thessaloniki , FAUSTO, 2013 She has taken part in group exhibitions: – Thessaloniki GALLERY MYRO, titled MEET THE ARTIST 2014 (March 2014) – Τhessaloniki Conference center PIRAEUS BANK “in the shadow of the artist lights of civilization” (June 2014) –  IMVROS Greek-Turkish Group Exhibition (in the context of brotherhood) 1-5 July 2014 -KIFISIA -Athens “WINDOW TO LIFE” TIME oF ART GALLERY  (March 2015)