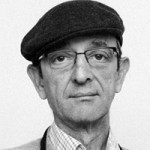 Dimitri Noulis was born in 1956, in Thessaloniki. After primary school he went to Switzerland for his secondary studies and then to L.S.E. for his B.Sc. in Economics,(International Trade Relations), a science he never applied. Since 1984 he has been managing bars, restaurants and hotels in Thessaloniki and Prespa,(N.Western Greece). Though painting had always been his passion, it is only the last ten years that he has been able to devote himself completely to practicing it. He started by exposing on the walls of The Liakoto Hotel in Prespa and went on to take part in two group-exhibitions in the Cultural Center of Prespes and one in Thessaloniki,(Villa Bianca). Then followed four personal ones in different bar-restaurants in the same town, where he lives and paints since 2010. He is father of four sons.