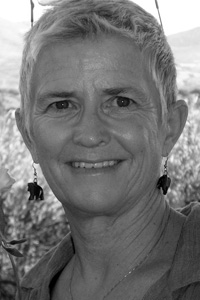 I was born and raised in Greece, trained by a folk potter on the Greek island of Siphnos and earned my BA in Ceramics from the University of California, Santa Cruz. Since 1981 I have been creating works of art in my studio in the Greek countryside and teaching pottery at the American Farm School in Thessaloniki. In 2015 I completed a Masters Course at the International Hellenic University.
For the SuppArting Project in NYC I chose to make a series of clay boxes enhanced with terra sigillata and burnished by hand. Each box is fired with smoke from sawdust and chicken manure which gives a shiny black finish. In contrast, inside the box is a ceramic wreath, inspired by the gold diadem discovered in Vergina in the tomb of Philip of Macedon.
Christine has participated in many individual and group exhibits including:
1980 Smith Gallery, Santa Cruz, California 1985 The American Center, Mitropoulou 82, Thessaloniki 2000 Pan Hellenic Exhibit in Maroussi
2001 Anetopoulos Pottery Museum, Volos
2004 Mt.Athos Exhibition, Vienna,Austria
2009 Loutra Paradisos old Turkish Baths of Thessaloniki
2010 Exhibition in the New York Design Center, Tucker Robbins Gallery